The Central Park, New York City has unveiled a statute of women’s rights activists – Susan B. Anthony, Elizabeth Cady Stanton and Sojourner Truth, making it the first monument of real women to be unveiled in the park. 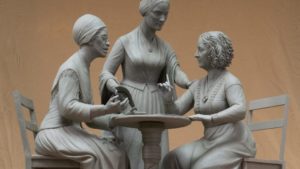 Susan B. Anthony was arrested and wrongfully convicted of voting illegally in 1872. Elizabeth Cady Stanton co-founded the American Equal Rights Association and pushed for women’s suffrage. Sojourner Truth, who though was born into slavery in New York, escaped in 1826 and became a popular abolitionist and women’s rights activist.

Central Park, which already has 23 statutes of real men and statutes of fictional women like Alice in Wonderland, Juliet in the Shakespearean play ‘Romeo and Juliet’, has finally decided to honour these three New York women who devoted their lives to fighting for equality and justice by installing its first statue of real-life and monumental women in the park.

This great feat coincides with the 100th anniversary of women winning the right to vote through the 1920 adoption of the 19th Amendment to the U.S. Constitution.