The alleged handler of the popular anonymous Instablog has been unveiled after she mistakenly started an IG live video which revealed her face. It’s also reported that the woman shouted “Jesus” and immediately ended the live video after noticing her mistake. 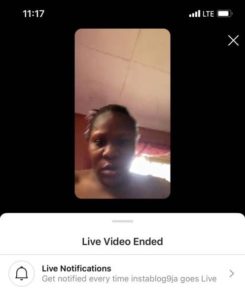 In reaction to this, Nigerians have taken to Twitter to express their views. One of such reactions was that of Naira Marley who advised the owner to get a bodyguard. See his tweet below:

Another Twitter user was of the opinion that the woman whose face was revealed can’t be the owner of Instablog due to the ceiling shown in the video. See the tweet below:

Instablog cant have that person as the CEO… see ceiling na pic.twitter.com/XWUI72nxjU

Another Twitter user wrote that the mistaken live video could be another plan of the anonymous blog. See his tweet below:

Lowkey, Instablog get plans. You can’t just miSTakEnly go Live after being anonymous for years.

Amidst different speculations and reactions, Instablog tweeted, “It was bound to happen at some point. In the end, live goes on. ??. Enough said.. Instablog9ja Instablog”

It was bound to happen at some point. In the end, live goes on. ??. Enough said.. Instablog9ja Instablog