The Africa Regional Certification has declared Africa free from wild polio, with Nigeria being the last African country to be cleared free from the virus. BBC has therefore confirmed that the disease can now only be found in Afghanistan and Pakistan. 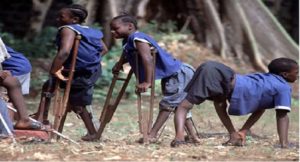 Polio is a virus which spreads from person to person, usually through contaminated water. It can lead to paralysis by attacking the nervous system, and in some cases death. According to BBC, more than 95% of Africa’s population have now been immunised against the virus.

‘Runaway From A Guy Who Has Everything ...