US Suspends Military Aid To Mali 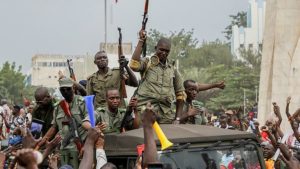 The United States on Friday suspended military aid to Mali after a group of rebel military officers seized power and placed the West African country’s president under arrest.

There will be “no further training or support of the Mali armed forces — we have halted everything until we can clarify the situation,” the US special envoy for the Sahel, J. Peter Pham, told reporters.

“It’s not clear which forces are involved in the mutiny, who is involved specifically, where loyalties lie,” he said.

They forced him to announce his resignation and unveiled a junta that would rule until a “transitional president” takes over.

Pham said the US government, which is particularly concerned about Islamist jihadists carrying out attacks in the country, was in contact with the junta, which calls itself the National Committee for the Salvation of the People.

“These contacts are operational,” Pham said.

“They do not imply recognition but acknowledgment that these people are to a certain degree in control of certain things.”

The takeover — Pham avoided the term “coup” — “is certainly not going to help,” he said, as the United States and other countries work together with the Malian military to combat Al Qaeda and Islamic State-linked groups conducting attacks in the region.

Washington currently provides surveillance and logistical support for French troops in the country conducting operations against the extremists.

He reiterated the US demand that Keita be released, noting his age and poor health.

“He is the legitimately elected head of state,” Pham said.