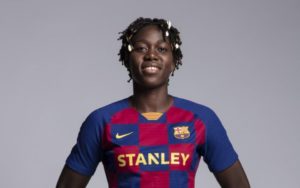 Nigerian international footballer and Super Falcons striker, Asisat Oshoala has opened up on how her own parents almost blocked her path to becoming who she is today.

In an interview with the Guardian Asisat Oshoala revealed that when she told her parents about her choice of career in life, her parents were not in support.

According to the Barcelona attacker, said that time played a major role in making her who she is today as one of the best female attackers in the world.