In the middle of several sexual abuse allegations, US Actor, Cuba Gooding Jnr has been sued freshly by an anonymous woman who claims that the US actor raped her in 2013 at The Mercer hotel in NYC. 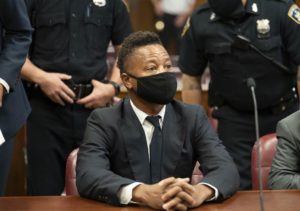 The legal documents reveal that the anonymous woman and her friend met Gooding at a restaurant’s VIP lounge on the evening of August 24, 2013 and he invited them for drinks back at the hotel. She said that she had followed Gooding to the hotel in a cab arranged by him in the hopes of meeting her friend at the hotel bar. She said that the actor requested her to come into his room and even though she was hesitant, she finally agreed.

She said that the actor started to undress in her presence after which he turned on the music, blocked the door and started to touch her inappropriately. She said that she tried to escape but the US actor became increasingly violent, threw her on the bed and raped her. When he was done, she stated that he went to the bathroom and came back to rape her the second time when she was attempting to get out of bed. She said that she was only able to leave his room after the actor fell asleep.

Cuba’s attorney, Mark Heller, has however denied the allegation on behalf of his client as he says in an interview with TMZ, “Clearly, this is a fabricated accusation that was never reported to the police — and forms no basis for any claim at this point with 7 years having passed.”

Adefemi ‘Miekharry’ Brice Murdered in US