Popular Instagram celebrity, Mompha who was re-arrested on Friday by EFCC, has demanded the sum of N5M from the Commission for making an unlawful arrest. 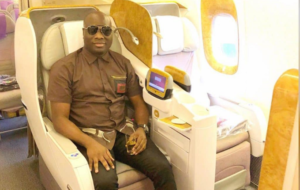 According to The Guardian, Mompha visited the EFCC office in Ikoyi to reclaim his five wristwatches, one Apple Airpod, one iPhone 8 mobile phone and one pair of sunglasses which the Court had earlier ordered the agency to return. Instead to be given his properties, he was re-arrested by the Commission and denied his properties on the reason that Mompha was wanted in connection with fresh cyber fraud allegations.

Mompha has however challenged his fresh attention and detention through his counsel, Mr. Gboyega Oyewole (SAN) and also prayed the court to declare his re-arrest and detention by the Commission as unlawful and unjustifiable. He also urged the court to declare that the continued seizure of his items violated his right to own property under Section 44 of the Constitution. He therefore prayed the court for his immediate release and the sum of N5M as damages. The court is yet to fix a date for hearing.