The former Chelsea football star, Willian Borges DaSilva has been signed into Arsenal on a three-year deal after 5 days of announcing his exit from Chelsea. 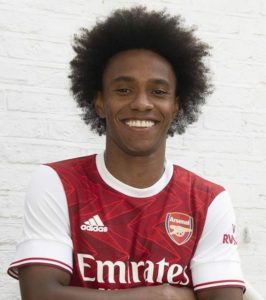 This was disclosed by Arsenal’s official Twitter page where it was written thus, “? Brazil international @WillianBorges88 has signed a three-year deal to join us ahead of the 2020/21 season”

? Brazil international @WillianBorges88 has signed a three-year deal to join us ahead of the 2020/21 season

Arsenal Manager, Mikel Arteta has this to say about Willian Borges DaSilva – “I believe he’s a player that can really make a difference for us. He has the experience of everything in the football world but to still have the ambition to come here and contribute to bringing the club where it belongs. I have been really impressed with all the talks I have had with him and how much he wanted to come.”

Speaking on this new deal, Willian said, ““I think that with Arteta, Arsenal have a great opportunity to fight again for titles in the Premier League and in Europe so I’m very happy because of that. When I talked to Mikel, the conversation was good, he gave me confidence to come to Arsenal. He said a lot of good things to me and that’s why I have come to Arsenal.”