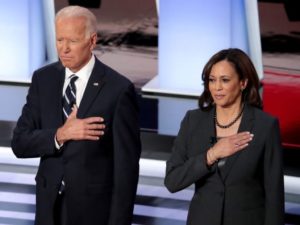 Joe Biden, in a tweet has described Kamala as “a fearless fighter for the little guy, and one of the country’s finest public servants.” He also tweeted, “Back when Kamala was Attorney General, she worked closely with Beau. I watched as they took on the big banks, lifted up working people, and protected women and kids from abuse. I was proud then, and I’m proud now to have her as my partner include this campaign.”

In response, Kamala Harris tweeted that she is honoured to join Joe Biden as the party’s nominee for Vice-president and do what it takes to make Joe Biden the Commander-in-Chief of the United States. She also wrote, “JoeBiden can unify the American people because he’s spent his life fighting for us. And as president, he’ll build an America that lives up to our ideals.”

Barack Obama has commended the choice of Joe Biden in a tweet where he wrote that he has known Kamala Harris for a long time. He tweeted, “She is more than prepared for the job. She’s spent her career defending our Constitution and fighting for folks who need a fair shake. This is a good day for our country. Now let’s go win this thing.”