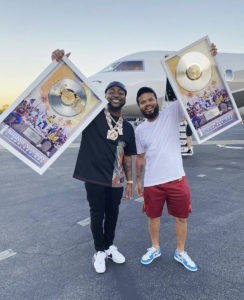 Boss of Davido Music Worldwide record label Davido, has received a  plaque from Sony Music Entertainment over his achievement.

Davido’s “A Good Time” album has hit one Billion streams worldwide. He has been awarded a plaque by RCA Records to celebrate his new achievement in the music industry.

RCA Records is an American Record Label owned by Sony Music Entertainment, a subsidiary of Sony corporation of America. Davido’s “Good Time” is his second studio album which was released on November, 2019. It was an album to celebrate the great changes and growth Davido has gone through.

Until You Get Married, You Can’t Comprehend ...

Annie Idibia Reacts To Allegations That She ...