Anthony Madu Admitted Into an American School of Ballet Via Scholarship

The video of the young ballet dancer, Anthony Madu dancing in the rain has caught global attention as Anthony Madu has been awarded a scholarship into an American school of ballet. 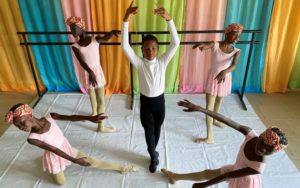 The video which had earlier caught the attention of the Nigerian actress, Cynthia Erivo, has now been noticed by an elite American Ballet Theatre which offered him a scholarship and also arranged internet access for virtual training this summer. The school also announced that Anthony Madu will be training in the United States next year on a scholarship from ‘Ballet Beyond Borders.’

The 11-year old ballet dancer, Anthony Madu was to be a priest according to his parent’s wishes but his life took another turn after a video of him dancing barefoot in the rain went viral.

What an inspiration Anthony Mmesoma Madu is! Thank you for sharing so much talent, @leapofdanceacademy! pic.twitter.com/66EwQRNl93