The Ondo State Deputy Governor, Agboola Ajayi has left the Peoples Democratic Party (PDP) after he defected from APC to PDP to run for the forthcoming 2020 Ondo State Gubernatorial elections. 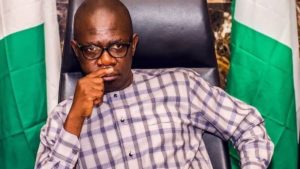 This was announced by the Deputy Governor’s media adviser, Allen Sowore. According to the Deputy Governor, he made the decision to leave based on the call by the majority of the good people of Ondo State to give hope to the hopeless, provide credible and purposeful leadership in the State.

He also reassured his supporters and told them to remain committed. He mentioned that he will be announcing his next line of action soon. Festus Oboro, the PDP Chairman in Apoi Ward II of Ese-Odo Local Government Area has acknowledged his resignation letter.

CASHING IN ON COVID