The former Governor of Ekiti State has condemned the comments Olusegun Obasanjo made about the deceased Buruji Kashamu.

The Guardian reports that there has been a political animosity between the former president of Nigeria, Olusegun Obasanjo and Buruji Kashamu who died from Covid-19 complications at the First Cardiology Consultants Hospital in Lagos. 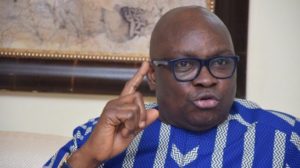 This animosity might have made Obasanjo say in a statement signed by his spokesperson, Kehinde Akinyemi that “Senator Buruji Kashamu in his lifetime used the maneuver of law and politics to escape from facing justice on alleged criminal offence in Nigeria and outside Nigeria. But no legal, political, cultural, social, or even medical maneuver could stop the cold hand of death when the Creator of all of us decides that the time is up.”

In reaction to Obasanjo’s comments, Fayose said in a series of tweets, “It is regrettable that Obasanjo could say what he said about Buruji Kashamu after his death and when he can no longer question him. Why didn’t he say that when Kashamu was alive?

“Can Obasanjo say in good conscience that he did not at some point collaborated with Kashamu and most of the things he (Kashamu) did politically were not with his collaboration?

“Nigerians will watch out for Obasanjo’s own end. He should stop forming saint because he is not.  He should also remember that his own end will come too and nobody knows how the end will be.”