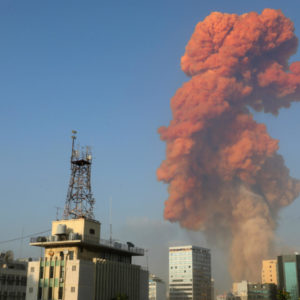 A massive explosion ripped through central Beirut on Tuesday, killing dozens of people, injuring thousands and blowing out windows in buildings across the city.

The blast near Beirut’s port sent up a huge mushroom cloud-shaped shockwave, flipping cars and damaging distant buildings. It was felt as far as Cyprus, hundreds of miles away, and registered as a 3.3 magnitude earthquake in the Lebanese capital.

At least 73 people were killed in the blast, Health Minister Hamad Hassan said, according to national broadcaster TeleLiban. He told reporters earlier that at least 2,750 people have been wounded.

The explosion was initially blamed on a major fire at a warehouse for firecrackers near the port, according to Lebanese state news agency NNA. The director of the general security directorate later said the blast was caused by “high explosive materials confiscated years ago,” but did not provide further details.

An investigation into the explosion was announced by Lebanese Prime Minister Hassan Diab. The probe will include “revelations that will be announced about this dangerous warehouse which has been present since 2014,” he said, without providing any additional details.