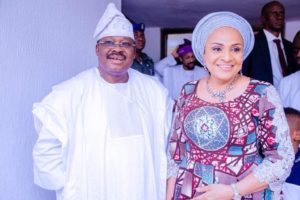 Florence Ajimobi, wife of the late Senator Abiola Ajimobi, has come out to speak after her husband’s death saying that her husband lived 70 years of fulfilment. She said this on Saturday, 1st August, 2020 when a delegation of the National Union of Journalists paid her a visit at home. She also disclosed that she believes her husband made heaven and is at peace with God.

She said, “My husband lived 70 years. 70 years of fulfilment, achievements and impact on many lives. Forever, I will be proud of him. I called him my hero. He is my hero and will forever be my hero.”

She also passed a message to those begrudging her husband in her statement. She said, “Whoever is begrudging Abiola Ajimobi, who else do you want to begrudge now? The man is dead. That peace you cannot make again. You cannot rectify it.

“I know whoever is not happy with him will feel that guilt forever because the opportunity to make up with him is gone. Life is short. Abiola Ajimobi has gone today, who is next? Nobody knows. It could be anybody.”

Speaking on her emotions after the death of her beloved husband, Florence Ajimobi said that she misses her husband. According to her, she still cries because she misses his love, advice, companionship and support. She said, “He was my greatest supporter. He thinks I’m a strong woman, but this time, I tell you I am not a strong woman. He used to give me all the strength I needed as a woman.

“So, when I cry, it is not because he did not achieve much, but because I miss so much about him. I don’t want to behave like an unbeliever because I know nothing happens without God’s input. We are all here one day and we are all going back one day. Nobody knows when death is going to come. I believe so much in destiny and I believe my husband’s time was up.”

ShopRite To Exit Nigerian Market After 15 ...