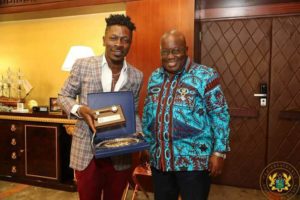 The president took to his official Twitter handle to share his comments about Shatta Wale’s feature with Beyonce. His tweet has generated some talks on the streets of social media with many of Shatta’s followers hailing him.

This isn’t the first time the president has congratulated the dancehall artiste. He once invited him to the Flagstaff House sometime ago.