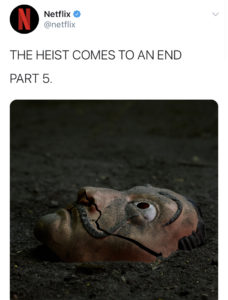 Money Heist season 5 will be the final season of the Netflix show. The Spanish crime drama has seen a lot of success in its past four seasons, being one of the most popular and talked about shows on the streaming platform. In addition to having great viewership, Money Heist has received critical praise for its jam-packed action and captivating storylines.

The show has also won multiple international awards, including an International Emmy Award for Best Drama Series in 2018.

Netflix has revealed that the platform’s most successful Spanish-language series “Money Heist” (“Casa de papel”) will end with the conclusion of Part 5, tweeting on Friday that “The heist comes to an end.”

Shooting is set to begin soon in Spain, Denmark and Portugal, with actors Miguel Ángel Silvestre, a Netflix alum of “Narcos” and “Sense8,” and Patrick Criado, most recently in Movistar Plus’ most-viewed original series “The Invisible Line,” joining the established and now iconic cast featuring Úrsula Coberó (Tokyo), Álvaro Morte (The Professor) , Itziar Ituño (Lisbon) and Pedro Alonso (Berlin) among others.

I’m A Feminist But Submitting Yourself To ...