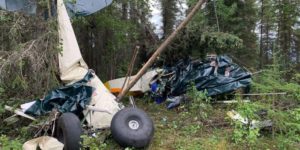 Seven people have been confirmed dead after two planes collided in mid-air on Friday morning in Alaska. One of those confirmed dead was a Republican member of the Alaska State House of Representatives, Gary Knopp who was piloting one of the planes.

According to Clint Johnson, chief of the Alaska regional office of the National Transportation Safety Board, investigation has started into the cause of the plane crash, and has not been concluded yet. Thus, one cannot yet say the plane who caused the collision.

Apart from the 67-year old Alaska lawmaker who died, other people who died are Gregory Bell, 67, who was the pilot; David Rogers, 40, who was a guide; Caleb Hulsey, 26; Heather Hulsey, 25; Mackay Hulsey, 24; and Kirstin Wright, 23. They were all confirmed died at the scene except for one person who died while he was being transported to the hospital after he sustained severe injuries.

May their souls rest in perfect peace.