Tracy Morgan and Wife to Divorce After 5 Years of Marriage 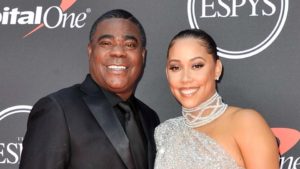 American Comedian-Actor Tracy Morgan has revealed that he and his wife Megan Wollover have split, after almost five years of marriage.

The comedian, 51, and Megan, 33, – who share seven-year-old daughter Maven Sonae – wed in August 2015, 14 months after he was left fighting for his life following the horrific bus crash that killed his friend James McNair.

Tracy announced his engagement to Megan while walking the red carpet at the Emmy Awards back in September 2012, and it later seemed that his near-death experience prompted the couple to get married after their long engagement.

‘Sadly, after nearly five years of marriage, Megan and I are filing for divorce. This is a challenging time for all involved, so I ask that you please respect our privacy,’ Tracy said in a statement on Wednesday