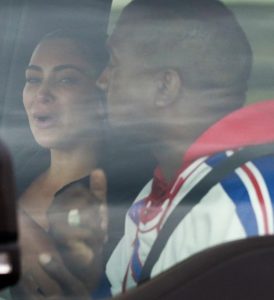 American power couple Kanye West and Kim Kardashian finally reunited after Kanye West caused a series of blunder on social media with his rants on their marriage and family.

As reported earlier, Kanye West flew in his private jet to Wyoming to seek health checks as photos of his arrival at the Cody Regional Health surfaced.

Kim and Kanye spotted seated together engrossed in an intense conversation after they had left Wendy’s fast-food restaurant in Wyoming probably to have talks over their marriage crisis.

Kim reportedly broke into tears at some point during their heated argument in the car but the main subject their conversation is unknown.

The celebrity couple met for the first time in weeks after his political campaign rally and Twitter meltdown where he made some damning revelations about how he and Kim initially planning on aborting their first child, North.