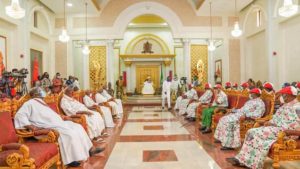 The Oba of Benin, Ewuare II, has revealed that he will summon all traditional rulers in Edo State for a special prayer asking for peace to reign during the Edo Gubernatorial Elections. He said this when the Governor Obaseki of Edo State, who is also a candidate in the forthcoming elections, and other stakeholders of the Peoples Democratic Party visited him at the palace.

The Oba of Benin also mentioned that his prayers always gets answered and he gave an example to be when he prayed against the impeachment of Obaseki. He said, “I remembered when I visited governor Obaseki in his office, he asked me to pray for him to be able to complete his tenure in office and I did and today, he has not been impeached despite the ups and downs and I thank my God and my ancestors for answering my prayers.”

The Oba of Benin also emphasized that he remains non-partisan in the Edo politics and also said that his prayers are concentrated on God providing a good leadership for the people of the state.