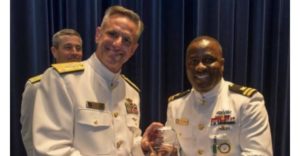 Nigerian officer, Lieutenant Victor Agunbiade has been awarded by the United States Navy for his hard work and accountability by offering him a medal of commendation.

He was placed in charge of a whooping amount of $45 million (N17 billion) in cash transactions where he handled it truthfully which accounted for around 70 per cent of its overseas disbursing amount.

He served the cash Disbursing Officer at the navy’s Camp Lemonnier in Djibouti between October 2019 and July to earn the enviable award.

His citation presented to him stated that “Additionally, he managed 100 per cent accountability of $23 million (N8.7 billion) across six rigorous inspections and independent audits with zero discrepancies.

“By his unswerving determination, wise judgment and complete dedication to duty, Agunbiade reflected great credit upon himself and upheld the highest traditions of the United States naval service.”

“What You Said Is Bullsht, Next Time ...