Housemates Engage In Argument Which Nearly Ended In A Brutal Fight 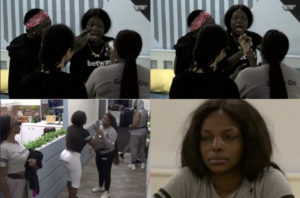 Big Brother Naija Lockdown Season 5 has recorded its first loud quarrel which nearly ended in a brutal fight in the house.

The housemates took to the yard for their first arena games where they were grouped into two groups (Team Black & White) where a team asks a question for the other team to answer. Team Black mentioned Japan as the answer to a question from Team White on where the next Olympic games ill be held.

Team White refused to award them the point saying the answer they have on the paper is Tokyo. The fight escalated quickly to the exchange of words between Wathoni and Ka3na who nearly traded blows but were stopped by the men in the house. Team Black was later adjudged the winners with 19 points whilst Team White had 16 points.

Barack Obama To Be The First Guest ...