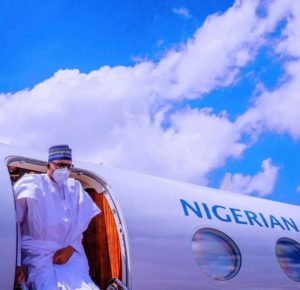 President Muhammadu Buhari along with the presidents of Ghana, Ivory Coast, Niger and Senegal have arrived in Mali to reduce the ongoing political crisis in the country.

This is after violent protests rocked Mali in a bid to force the embattled president of Mali, Ibrahim Boubacar Keita, to resign. Mali’s president has been accused of failing to tackle the failing economy, corruption and an eight-year jihadist conflict.

President Muhammadu Buhari and the other presidents of African counties, who are delegates of the Economic Community of West African States (ECOWAS), are on a mission to weigh in on the solutions to the ongoing political crisis in Mali.

Davido Seen in the Studio With American ...