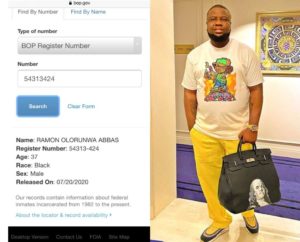 The Nigerian Instagram personality, Ramon Abbas popularly known as Hushpuppi has been reportedly released from jail. This was inferred from the information available on the United States Federal Bureau of Prisons website.

It was shown on the website that the Instagram personality, who was arrested for a cyber scam of millions of dollars, with BOP number 54313-424 was released on Monday, 20th July.

There are no other sources confirming the release of Hushpuppi except the information from the United States Federal Bureau of Prisons website. Hushpuppi was earlier denied bail by a judge after the prosecution argued that he was a flight risk.

Simi Gives Fans A Glimpse Of Her ...