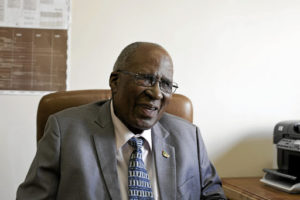 South African anti-apartheid activist, Andrew Mlangeni and the last surviving Rivonia Trialist, Andrew Mlangeni has died at the age of 95. The President of South Africa, Cyril Ramaphosa, announced the death of the icon in a statement which reads, “The passing of Andrew Mekete Mlangeni signifies the end of a generational history and places our future squarely in our hands. Until recently, we were able to sit at Bab’ Mlangeni’s feet and draw on his wealth of wisdom and his unfailing commitment – even at his very advanced age – to a better life for all South Africans.

“With his passing as the last remaining Rivonia Trialist, Bab’ Mlangeni has indeed passed the baton to his compatriots to build the South Africa he fought to liberate and to reconstruct during our democratic dispensation. He was a champion and exemplar of the values we need to build a South Africa that provides dignity and opportunity for all and which takes its rightful place in the global community of nations.

“My thoughts are with the Mlangeni family today and with all who have had the blessing of meeting and being touched by Bab’ Mlangeni’s passion for achieving a better society as well as his passion for a life that is well-rounded, adventurous, healthy and embracing of people from all walks of life.”

Andrew Mlangeni reportedly died after he was admitted to a hospital following an abdominal complaint. He made an outstanding contribution to the fight against apartheid in South Africa. May his soul rest in peace.