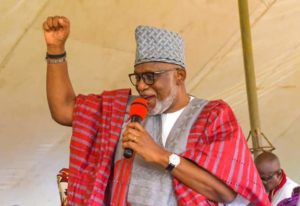 It’s double celebration for the Governor of Ondo State, Rotimi Aketi Akeredolu as he celebrates his birthday today and emerges the APC’s candidate for the Ondo state gubernatorial elections.

The governor, who recorded victory at the APC Primary elections has taken to his Twitter page to announce his victory. See his post below:

4+4 is the code for continuity. #GODWIN pic.twitter.com/Dg4GZHh9Ox