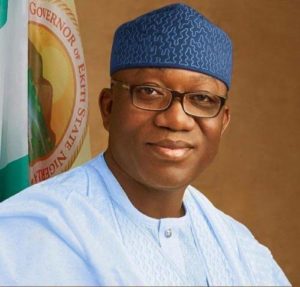 The Ekiti State Government has announced that it will be begin to prosecute face mask defaulters in Ekiti State. This was announced by the Attorney General of the State and Commissioner for Justice, Wale Fapohunda, who expressed concerns about the lackadaisical attitude of the public towards the safety measures stipulated by the Nigierian Centre for Disease Control (NCDC).

Wale Faphunda, the Commissioner for Jusitce and the AG of the State, also mentioned that mobile courts would be created for the purpose of prosecuting the face mask defaulters in the state. The State Government has however swung into action as it was able to prosecute and convict (60) face mask defaulters on Monday, 20th July, 2020.

Speaking on the conviction, the State Chairman of the Covid-19 Task Force, Professor Bolaji Aluko said, “”A fine of N5,000 is imposed on the convicts for refusal to wear face masks in public, in line with the new law to contain the disease. We are not interested in charging people on anything. We want them to understand that face mask must be worn. It happens that sometime there are people who will not obey the rules unless they are fined. It costs only N100 or N200 to buy a face mask and a little inconvenience to wear it.
“Now you have to be caught and be charged N5,000,’’ Aluko said.