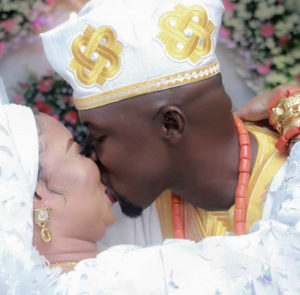 Nigerian actress and newly wedded wife, Liz Anjorin has declared herself a legal property of her husband, Lateef Lawal.

Liz Anjorin, who shared her story of navigating her life to success with her Lateef in what she described as 14 years of ups and down, said that he is now officially Lateef’s legal wife.

This goes on to reply to social media users who claimed and accused her husband of abandoning his five wives and a 3-month-old baby to marry her.

In an interview with THE PUNCH, Anjorin said,

“I am happy because I’m with my best friend. I don’t even feel as if I just got married. I feel that I signed a life contract with my best friend. He is my helper. He didn’t allow me take poison 14 years ago and he stopped me from committing suicide. I’m glad it turned out well between us because he is behind my success story. People mocked him but he stood by me through thick and thin. A lot of people didn’t see my wedding coming but it’s better to leave people guessing about one.

“It took us this long because I had told my late mother that I wanted to make some money first because I didn’t have what it took to become a wife. My husband respected my opinion and told me that he would always be there for me. Now I’m his legal wife. We have done all that is necessary. If my mother were alive, she would have been the happiest person on earth because my husband is her godson. He was the only man she endorsed.”

Omotola Jalade Gushes Over Her Husband After ...