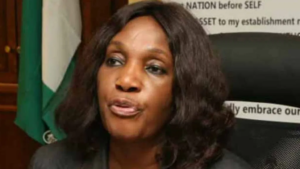 Joy Nunieh, the former managing director of the Niger Delta Development Commission (NDDC) was earlier prevented from leaving her house by armed security operatives who stormed her house since about 4am.

Joy Nunieh was supposed to testify in Abuja before the Senate today due to the ongoing probe of the Niger Delta Development Commission. Governor Nyesom Wike of Rivers State has however come to the rescue of the former Managing Director of the NDDC, Joy Nunieh. The Governor, who came into her house, ordered the police officers out of her house and later took her along with him as he drove out.

FAAN Calls Out The Governor of Adamawa ...