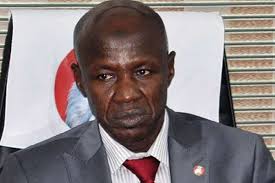 Ibrahim Magu, the suspended acting EFCC Chairman has been released from police custody. According to Channels Television, this was confirmed by Magu’s lawyer, Toyin Ojaomo who had earlier asked the Inspector-General of Police to grant bail to Magu on the basis of self-recognizance.

“The Inspector-General of Police, therefore, advises that you reconsider directing your request to the Chairman of the Presidential Panel for appropriate attention.”

Ibrahim Magu was arrested on Monday, 6th July, 2020 following allegations of corruption and insubordination levelled against him by the Attorney-General of the Federation, Abubakar Salami.