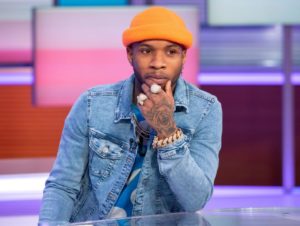 Canadian rapper Tory Lanez was arrested early Sunday in Los Angeles after a house party altercation turned violent and the LAPD arrived on the scene.

The arrest happened around 4:30 a.m. near a house in the Hollywood hills where the 27-year-old hip-hop star was arrested and charged with carrying a concealed weapon in his vehicle. Fellow rapper Megan Thee Stallion was reported to be at the party and had received injuries from a glass wound to her foot.

The incident began at the house party and proceeded to an argument in an SUV. Police were able to locate the SUV, occupied by the two stars, and reported finding a gun inside the vehicle.

Lanez, whose real name is Daystar Peterson, posted bond and was released from the Hollywood jail.