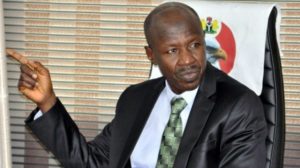 Ibrahim Magu, suspended Chairman of the Economic and Financial Crimes Commission, (EFCC), has cried out over the worsening conditions of his health.

Magu is still in detention and is being investigated by a panel commissioned by the Presidency, led by Justice Ayo Salami after security operatives arrested him in Wuse II.

Wahab Shittu, counsel for Ibrahim Magu petitioned the Inter-agency panel to grant Magu bail and placed some requests from the former court of Appeal judge, Salami.

Shittu said in the petition;

“In view of our observations above, may we humbly request from your Lordship, the Chairman of the Committee and other distinguished members:

i) That our client will appreciate if afforded the privilege of the terms of reference of this distinguished Committee.

iii) That our client will appreciate the intervention of the Committee in ordering the release of our client from custody to enable him defend himself adequately and attend to his deteriorating health in custody.

iv) That our client be given adequate time to respond to the allegations against him including providing necessary materials and evidence before this Honourable Committee.

v) That our client be afforded the opportunity to confront the petitioners with his own defence.

vi) That witnesses be examined in his presence and that of his counsel.

vii) That our client be guaranteed his right to fair hearing including his right to liberty in the course of the proceedings of this distinguished Committee.