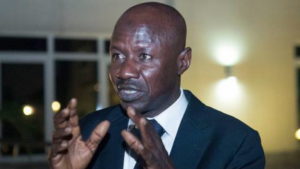 Magu has been probed for days by an Investigative Panel presided by Ayo Salami, ex Court of Appeal Judge over corruption accusations.

President of Nigeria, Muhammadu Buhari granted the dismissal of the EFCC Boss as leader of the anti-crime agency, electing Mohammed Umar as the new EFCC’s Head of Operations.