Buhari Affirms the Suspension of Ibrahim Magu, Appoints Mohammed Umar as His Replacement 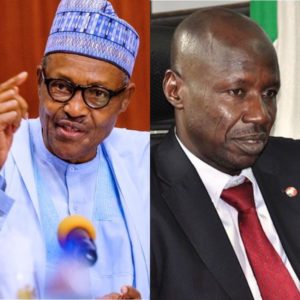 President Muhammadu Buhari has affirmed the suspension of Ibrahim Magu as the acting Chairman of EFCC with immediate effect. His suspension was announced in a statement from the Office of the Attorney-General of the Federation and Minister of Justice.

The statement disclosed the reason for the suspension to be to allow for an unhindered investigation and trial of the former acting EFCC chairman. The statement also mentioned that the President has directed Muhammed Umar, the EFCC Director of Operations to replace the suspended acting Chairman of EFCC pending the conclusion of the investigation and further directives from the Federal Government

My Client Was Kidnapped From Dubai – ...