Official Video for “Know You” by Ladipoe Featuring Simi is Out 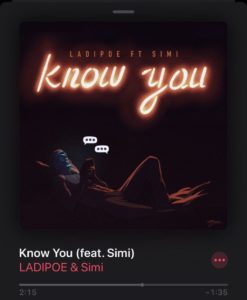 The long-awaited official video for the hit single, “Know you” by the Nigerian music artist, Ladipoe featuring Simi has been released.

The song, which has been widely publicized on Tiktok through the #knowyou challenge, was jumped on by most Tiktok users as they mimed the words of the song with either a celebrity or a friend/lover.

The song talks about ‘the friend zone’ as well as the doubts involved when two close friends of the opposite sex decide to be in a relationship with each other. The official video has been uploaded on YouTube.