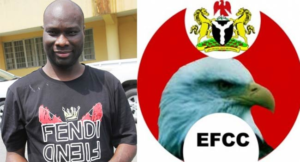 The trial of the internet celebrity, Ismaila Mustapha, popularly known as Mompha and his gang members who were arrested by the Economic and Financial Crimes Commission has started in the Federal High Court, Lagos Division.

Mompha and his team members have been arraigned on a 14-count charge bordering on operating a Bureau De Change (BDC) without proper registration with the Corporate Affairs Commission and other regulating ministries, which has resulted to failure to comply with the regulations of the Federal Ministry of Industry, Trade and Investment in the conduct of the business as well as unlawful negotiation of foreign exchange.

The Prosecution Counsel was unable to conclude his case as the matter was adjourned to July 10, 2020 for continuation of trial.