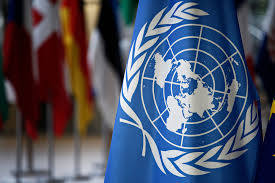 The United Nations has suspended two of its employees who were involved in a sex video that went viral on social media platforms. This was announced by Mr. Stephane Dujarric, the spokesman for the Director-General.

He mentioned that the staff involved in the viral sex video have been placed on an administrative leave without pay pending the conclusion of the ongoing investigation. “Two male international staff members, who were in the UN vehicle in Tel Aviv have been identified as having engaged in misconduct, including conduct of sexual nature.

“Given the seriousness of the allegation of failing to observe the standards of conduct expected of international civil servants, the two staff members have been placed on Administrative Leave Without Pay.

“This is pending the results and conclusion of the ongoing OIOS investigation.

“UNTSO has re-engaged in a robust awareness-raising campaign to remind its personnel of their obligations to the UN Code of Conduct. The OIOS investigation continues, and we will keep you informed,” he said.

322 Nigerians Evacuated From the United States ...

Celebrating Johnny Drille as He Turns a ...