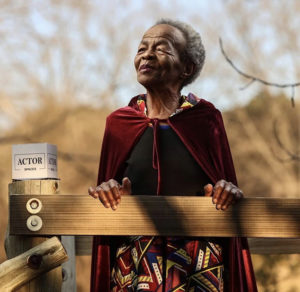 Legendary South African actress Mary Twala has passed away at the age of 80.

Details surrounding Twala’s death are still unclear, but news of her passing was revealed by her son, Somizi Mhlongo, through a post on Twitter on Saturday.

The icon has featured in several local productions, including the very first season of Generations.

In 2007, she starred in the drama Ubizo: The Calling, which explored issues on the tradition of Ubungoma in South Africa.

Last year, the veteran actress received the the Order of Ikhamanga for her contribution to the performing arts.

She had an extensive career as an actress, performing in roles in film and theatre. Her career includes international films such as Mapantsula and Sarafina!, among others.

With a career spanning over six decades, Mam Mary, as she was affectionately known, has left an indelible mark on South Africa’s film and television industry.