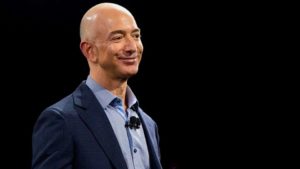 Jeff Bezos’s fortune has soared to $171.6billion, breaking his previous wealth record prior to his divorce. The billionaire’s net worth broke its previous peak on Wednesday as Amazon’s stock surged 4.4 percent to a record $2,878 value per share, boosting his fortune.

Jeff Bezos, who is known to be the richest man in the world, saw his fortune rise even after he relinquished a quarter of his stake in Amazon as a part of his divorce settlement with ex-wife Mackenzie Bezos last year. She has become the world’s second-richest woman.

Tuesday’s record beats his previous high of $167.7billion, which was set on September 4, 2018, before his divorce, according to the Bloomberg Billionaires Index.

This year alone Bezos has seen his fortune increase by $56.7billion. Amazon hasn’t commented on the founder’s surge in wealth.

Other tech CEOs have seen their wealth boom even amid the pandemic that has led millions to file for unemployment.

Broke People Have No business Being In ...