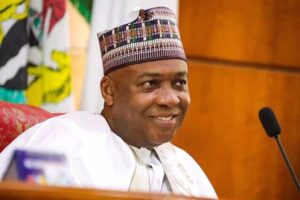 Senator Bukola Saraki has released a statement where he addresses the surge in cyber crime involving Nigerians. The Senator stated that he is displeased and disturbed with the recent surge and he also expressed his concern on the effects it would have on Nigerians locally and internationally.

The Senator referred to Huspuppi’s fraud case and other related cases in the United States of America and said that Nigeria has had to deal with the negative news about the country especially in its relationship with the United Arab Emirates and the United States, while still dealing with the pandemic.

He also expressed different implications well-meaning Nigerians have to face due to the negative image portrayed by the “shameful ambassadors”. He said, “Millions of Nigerian citizens who travel across the world to study, work and live peacefully while abiding with the laws of their host countries have also now become stigmatised. The immigration and homeland security officials will certainly reinforce intrusive inspections when screening us at the point of entry and even when we go around town in foreign lands. There might be more humiliating experiences and some negative comments made against us. Our genuine business men and women will have to pass tougher diligence tests while dealing with new partners.”

He also highlighted measures of preventing cyber crime which are: review of the education system, creating an economy that encourages and rewards hard work talent and skill. You can read the full article here: