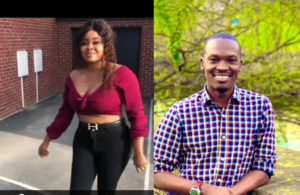 Part of her tweet reads thus, “Your favourite online influencer who is also a medical doctor in the UK who always has an opinion on every topic on Twitter, he is morally upright on the Internet, yet does the exact opposite of what he preaches online, preaching against rape and doing the exact opposite in person. Dr. FUNMILAYO is the accused!”

Your favorite online influencer also a medical doctor in the UK who always has an opinion on every topic on Twitter, he is morally upright on the Internet, yet does the exact opposite of what he preaches online, preaching against rape and doing the exact opposite in person.

Dr. Olufunmilayo has however responded by saying that he met Bola on Twitter in November, 2019 and after some time, the duo started dating – a relationship which didn’t work out great . He however said that in an attempt to save the relationship, he had asked her to come to the United Kingdom but the visa application failed.

He said that Bola was bent on coming to the UK which made her start a second visa application after the first one failed. He told her that he wasn’t going to have so much time to give her because he was preparing for his exams and secondly, the relationship was already becoming turbulent. He offered to host her in his apartment if she would stay on her own, especially since she was going to foot the travelling expenses herself. The doctor said he has screenshots to prove this.

He also disclosed that one day in his apartment, the lady took a red wine in his fridge and offered to take it together with him. He didn’t see a problem with it as he later asked the girl to come over to his room so they could take the wine together and sex happened. After some time, the said lady sent a message saying she didn’t give her consent and he asked her if she was trying to push it on him. He said they were both drunk and they had sex after; he also said that the girl told two of his friends that they were both drunk which led to sex, but she regrets it.

He said Bola continued to stay in his apartment and after some time, there was a conflict between Bola and his friend. The conflict led Bola to start trying to pack out by 10pm. He said he pleaded with her to stay till the next day because of her safety. He said Bola instead came close and said she missed him which led to another sex.

He mentioned other conflicts too and the activities that led up to the sexual allegations which he called “blackmail”.

You can read the full story here:

Regarding the sexual abuse allegation:
(A rebuttal: Part 1) pic.twitter.com/ebHNzFqJiD

The rebuttal (Part 3).
Thank you all. Good night.

Africa Cup of Nations Postponed to 2022