Here’s All You Missed On The BBNaija Pepper Dem Reunion Last Week! 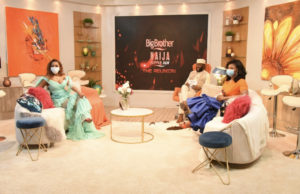 It’s been another week of the BBNaija Pepper Dem Reunion, and I tell you, the gist has been hot, hot, hot!

This week had some major showdowns and addressed some of the most memorable fights in the BBNaija house.

In case you missed it, here’s what happened at this past week

The Mercy and Tacha conundrum

On the Wednesday edition of the Pepper Dem Reunion, there were only three people in the studio – Ebuka, Mercy, and Tacha. From first glance, it was obviously going to be a really dramatic episode.

Mercy and Tacha are probably the most popular housemates from the Big Brother Naija Pepper Dem edition, but somehow, (especially from the activities of their fans on social media), they always seem to be at odds with each other.

Ebuka replayed the clip that got Tacha booted out of the BBNaija house and got them to talk about it.

We’re sure that the #Mercenaries and #Titans expected a huge fight to break out in this episode, but they were both relatively cool.

The Tacha and Seyi drama

Ebuka replayed another clip from their time in the House, which reminded us that Seyi and Tacha used to be pretty cool with each other at a time. The throwback clip reminded us that they were indeed cool together.

According to Seyi, things went sour because Tacha disrespected him. He said she wanted to be treated in a certain way but did not reciprocate that treatment. Tacha on the other hand said that she had a misunderstanding with Seyi, which they worked out, but that their friendship probably ended when Seyi called her a puta (this is the Spanish word for prostitute).

Seyi brought up the instance when Tacha said she had achieved more in her 23 years than he had. Tacha replied that the statement was still true. Seyi went on to say some things while Tacha just smiled at him. Let’s just say that Seyi trended on Twitter that night.

Esther talked about feeling bad when Diane and Mercy gossiped about her, as she considered them friends.

In her response, Mercy said she and Diane had noticed that Esther would abandon her female friends for any new love interest – Nelson, and then Frodd. This created some distrust between them. Most people did not seem convinced that Esther liked Frodd. They thought Esther was using him to get ahead in the game.

Phew! These two had a heated argument on set this week.

Avala and Isilomo seemed to be friends after the show, but Avala said she felt betrayed after a situation where she did not feel supported by Isilomo.

Isilomo replied saying she always had Avala’s back but felt she was wrong in the situation that was being referred to. At a point, Isilomo refused to talk any further about the issue, because she felt Avala should have told her in private if she felt offended, instead of mentioning it for the first time on the reunion show.

Ebuka also played a random game with the housemates, where he would ask a question and have the ex-housemates write the answer on a board.

He asked who liked food too much, and the general answer was Cindy! Do you agree?

There was no short supply of drama in BBNaija Pepper Dem Reunion this past week. The Pepper Dem squad looked equally amazing and served the hottest styles back to back.

Don’t miss out on the drama and excitement of the BBNaija Pepper Dem Reunion show. Visit www.dstvafrica.com or www.gotvafrica.com and download MyDStv or MyGOtv Apps to pay your subscription or switch your package.

Africa Cup of Nations Postponed to 2022