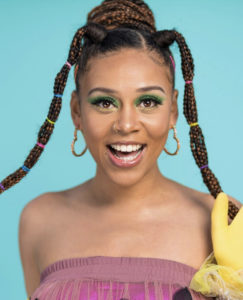 Epic Records is an American record label owned by Sony Music Entertainment, that has artists like , Drake, Future, Travis Scott, 21 Savage and others singed has announced the new addition to the family.

She was Nominated for best new international artist on Sunday’s BET Awards for the second time in as many years (she won in 2019), her songs “John Cena” and “Huku” have each logged over a million streams on Spotify, bringing her to the attention of Beyonce and Ed Sheeran, with whom she shared a stage at the 2019 Global Citizen Festival.

In developing Sho Madjozi, Epic, headed by chairman/CEO Sylvia Rhone, will collaborate with Sony Music Entertainment Africa (SMEA). “We’re working at a special company at a special time and we couldn’t be prouder than we are of our local star Sho and our big sister Sylvia for partnering to make this happen,” said Sean Watson, managing director of SMEA.

“African artists are enjoying an unprecedented level of visibility in music and Sho Madjozi is beautifully waving the flag for South Africa.  She’s bold, brilliant and remarkably talented and her music embodies all that is special about her homeland.  We’re honored to have her as the newest member of the Epic family.” Rhone added.

Here’s All You Missed On The BBNaija ...