Nigeria, USA Makes the List of Those Excluded from Europe 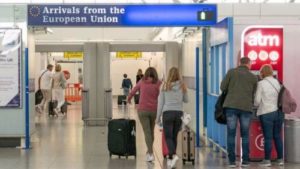 The European Union Commission has released a list of 54 countries who are permitted to travel into Europe. This is in response to the reopening of the shut borders in the country.

The European Union Commission further stated that citizens of Brazil, Qatar, the US and Russia would be permitted to enter Europe when the epidemiological situation in th countries improves.

Top 5 TikTok Challenges You Should Try