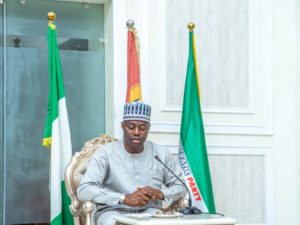 Late Senator Ajimobi, who was a Muslim, was supposed to have been buried hours after his death. However, when this was not done, rumours began to circulate round social media saying that the Oyo state Government is responsible for the delay in Ajimobi’s burial.

However, the Oyo State Government through the Chief Press Secretary to Governor Seyi Makinde has debunked such rumours and clearly stated that the current Governor of Oyo State, Seyi Makinde has played no role at all in causing any delay whatsoever regarding the burial of his immediate predecessor, Senator Ajimobi.

The statement signed by the Chief Press Secretary also revealed that the family of the deceased Senator approached the State Government by proxy to demand for a land under litigation for the purpose of Ajimobi’s burial. The said land litigation was instituted by the late Senator Ajimobi.

The statement also disclosed that Governor Seyi Makinde gave the family of the deceased permission to bury the dead in his Oluyole Estate, a permission which is against the current rule guiding land use in Government Residential Areas (GRAs). This rule forbids the burial of dead bodies in Oluyole Estate and Agodi GRA. The statement pointed out that since the Governor has waived the law and granted the family of the deceased permission, he cannot be said to delay the burial arrangement of the late Ajimobi.

A statement by the Chief Press Secretary to Governor @seyiamakinde, Mr. @TaiAdisa, indicated that the insinuations amounted to a wicked lie. pic.twitter.com/lNatpUVyC6

D’Banj Spotted in a Party Amidst Rape ...