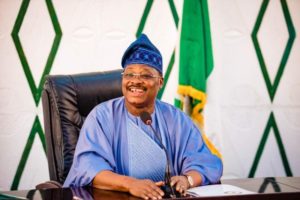 he remains of former Oyo State Governor, Senator Abiola Ajimobi, have been laid to rest in Ibadan on Sunday.

Ajimobi was buried according to Islamic rites at his 6th Avenue, Yemoja Street, Oluyole Estate residence in Ibadan, the Oyo State capital, amid tight security.

The Agodi GRA, which was the preferred choice by the Ajimobi family, was not approved by the Oyo State Government on the ground that there is litigation on the property.

Armed policemen were strategically positioned at the residence of the deceased.

Movements in and out of the neighbourhood were controlled as the burial ceremony held.

Party faithful and other loyalists of the late politician were barred from the burial.