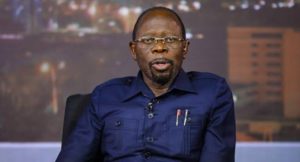 The former National Chairman of the All Progressives Congress has finally spoken on the party’s leadership crisis that ensued immediately after his suspension. He said that he is in support of the decision reached by the National Executive Council which was attended by the President of the Feder Republic of Nigeria.

That same meeting had suspended the party’s National Working Committee and had also appointed a caretaker commitee to manage the affairs of the party. Adams Oshiomole also mentioned that he has directed his lawyers to withdraw his case at the Supreme Court in demonstration of his loyalty to the party and to President Buhari.

He said, ““I am not going into the issue of legality or illegality, the bottom line is the President who invited me to lead the party and gave me all the support and even mobilised all the support across the country for my emergence as chairman also presided over the meeting where the NWC has now been dissolved.

“And because I have always assured the President of my loyalty, I know it is easy for people to speak of loyalty when the going is good, but loyalty is brought to the test when the going is getting really tough, so as a demonstration of that loyalty to Mr. President, the loyalty to our party, and loyalty to the Nigerian nation, I have decided to accept the decision in good faith.”

How to Practice Self-Care Without Spending a ...