Sho Madjozi Accuses Burna Boy Of Taking Down “Own It” 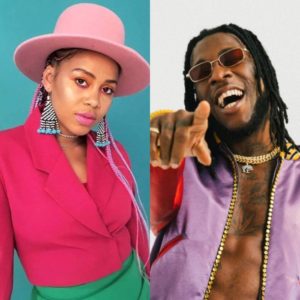 South African singer-rapper Sho Madjozi has accused Burna Boy of taking down the remix of Stormzy’s “Own It” on which she was featured following her BET nominations.

Sho Madjozi in a lengthy Twitter thread claimed that Burna Boy asked Stormzy’s team to take down the remix of the hit song after on which she was featured after she was nominated alongside Burna Boy for Best International Act in the 2020 BET awards.

“Own It” by British rapper Stormzy originally features Ed Sheeran and Burna Boy. A remix featuring Sho Madjozi was released in May, however, the song has now been taken down.

Sho Madjozi also claimed that she and Burna Boy were on good terms until she was nominated alongside him for this year’s BET awards. Madjozi claims Burna Boy took it down because he felt she was a threat. Burna Boy is up for Best International Act for the second year in a row after taking home the award in 2019. Meanwhile, Sho Madjozi bagged the award for Best New International Act last year.

Burna Boy in his response tweeted that the removal of the song had nothing to do with him or the awards as the remix wasn’t “properly” cleared with his record label.

“Own It is NOT my song.If my voice is on it however it should have been properly cleared.If the remix wasn’t cleared with the label(Atlantic US)it automatically gets flagged. Nothing to do with me personally or any award. Always best to reach out professionally. Congrats on BET’s!”

1. The song got automatically flagged a month late by coincidence

2. When they said YOU wanted it down they meant your label

3. A big international label would release a song without clearing it