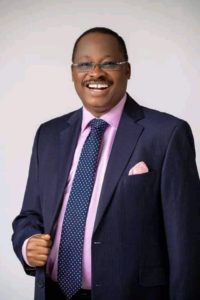 Isiaka Abiola Ajimobi, (16 December 1949 – 25 June 2020) was born to the Ajimobi family of Ibadan at Oja-Iba, Ibadan. He completed his primary education at Ibadan City Council Primary School, Aperin. Ajimobi studied Business Administration and Finance at the State University of New York, his MBA was in Operations Research and Marketing with a concentration in Finance at Governors State University, Illinois, both in the United states of America. In 1980, Ajimobi married Florence Ajimobi, a union that produced 5 children.

In 2001, he was appointed Managing Director/Chief Executive Officer of the National Oil and Chemical Marketing Company, a subsidiary of Shell Petroleum, Nigeria. In 2002, he voluntarily retired from the oil sector after 26 years of service.

In 2003, he became a Senator of the Republic of Nigeria representing Oyo South Senatorial District on the platform of the Alliance for Democracy (AD). In 2005, he established the first and the largest free vocational training center in Oyo State. After serving one term in the senate (2003-2007), he contested in the 2007 governorship election of Oyo state under the banner of the All Nigeria People’s Party, a bid which he lost. He contested again in the April 2011 elections under the Action Congress of Nigeria and was elected Governor of Oyo State.

On April 2015, Ajimobi contested for a second term for re-election under the All Progressive Congress against two of his predecessors in office, Christopher Alao Akala and Rashidi Adewolu Ladoja. In the event of his re-election into office he became the first Oyo State governor to serve two terms (2011-2019).

Ajimobi was named the Acting National Chairman of the ruling All Progressives Congress (APC) last week but never resumed office due to ill health. On 2nd June 2020, he was admitted to a hospital in Lagos with COVID-19 related symptoms. He died on 25th June 2020 at the age of 70.